a manuscript and some photos of the surface of the sun 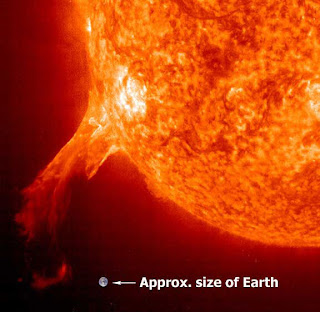 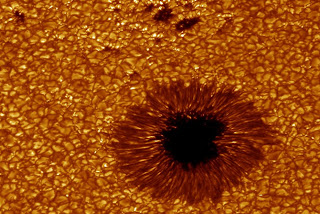 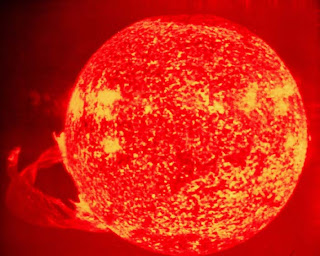 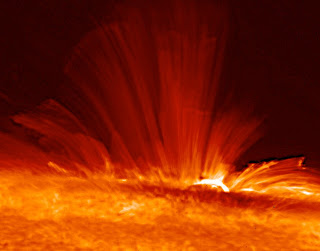 Near the edge of a high cliff called Relan, a particular species of flower occurred, here and here only. Blue and yellow petals, tomatose leaves, a thick, fleshy stem and exhibited a variety of variations and sports that often changed the habit of the plane so significantly that it was, oftentimes unrecognizable to all but the serious botanist and a few magicians who climbed here at various times of the year to gather specific parts of the plant in order to create teas, poultices and mixtures of dried flower parts for secret purposes.

It was held that a tea made from the unusually silvery, slightly florescent petals of this plant could be counted on the generate pre-cognitive dreams in certain subjects. Those who sought this kind of information first observed a regimen of fasting, meditation and other practices in order to increase receptivity to the infusion. This tea is purported to be extremely astringent and yet quite flavorful. It does not keep well and is traditionally consumed within a fortnight of the gathering of these plant parts.

The dreaming generated by imbibing this infusion are often complex in structure but always, despite baroque ornamentation, unveil an action or occurrence that otherwise would have remained hidden from the dreamer for a longer period of time. One would waken knowing something would occur in one’s waking state. the dreaming however was not time or circumstantially specific. One could be assured however that when this event took place it would be recalled as the subject of the dreaming.

This kind of activity was not often made available to those pilgrims who sought these magicians council. The quest prompting such an exploration as this needed first to be determined to be pure inquiry, that is to say, that one could not ‘wish’ to know something for the purpose of causing harm to anyone else.

For example, one could not dream if someone would die on a journey, but one could dream the kinds of lessons one would learn on that journey. This kind of dreaming was valuable in determining the difficulty of a situation. A selfless inquiry would be most readily responded to by the tea although many questions had been posed by great kings and warriors concerning the outcome of future battles. The information gained usually informed them of the kind of weather on that day or a bit of news concerning a loved one that might be received on the same day.

The poultices made from the leaves and fibers of this singular plant were also of an extraordinary nature. At the hands of a master magician they could restore a tree from a cut stump, the memory of an old man, healthy skin to a damaged skin, eyesight to a dead eyeball and courage to a faint heart. Placed up the ears it could create a blessed an unique music to be heard that, in its unraveling healed and brought peace to a troubled mind.

So powerful were these leaves and fibers that horses...