While my photo wasn't in Medusa's Kitchen the two poems showed up there. 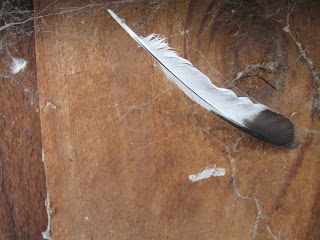 They are standing on the edge
Of the stair, gazing at the jewel
That is the dawn unfolding, neither
Afraid nor apprehensive. The day
Will cascade upon them, then through
them, wiping its silly smile across
All that lies before it. A blessing
Of a kind, but without the quiet
Voice that calls the powers to itself,
Dispersing again in a million
Amens. They drift before
The wave crashes, before the fire
In the fireplace really takes hold,
Declaring the memory of trees
To the damp air, before the clanging
Bells that threaten to topple
Childhood, clear water and singing
Into a collective murmuring of illusions.

Still they stand before it, eager to be
Enveloped. This is the world, for heaven's
Sake. What choice is left at this point?
We kiss it full upon the mouth,
The surface of the eye floating
Scars and image alike, a gray morning
Suddenly relieving itself of the clouds
And exclaiming at the green presents.
A KIND OF SINGING


The light beginning to crackle and glow
Around the buildings on the horizon.
In traveling through this place
We have no idea why such a phenomenon
Should occur. It’s rather like a
Small child being born and immediately
Becoming recognized as a great king.
What are the chances of such a thing?

The evening scoots down the low hills
As if it were another child, on a slide,
Being called to dinner just as he
Finally gains his spot at the top.
What to do? Come home now?

Sit down, press one’s legs into the
Sides of the slide and take as much
Time as possible to descend to the ground.
Everyone will understand somehow.

When we reach the bottom of the hill,
The entire landscape looks embossed,
A storybook cover one could run one's
Hand over and still feel the real worth
The story has to hold. No one has
Visited this place below the hill
For so long we have forgotten the songs
That used to be sung about it.
We believe we are making up a new song.
Posted by D.R. Wagner at 7:50 AM