Relative to the speed of the past 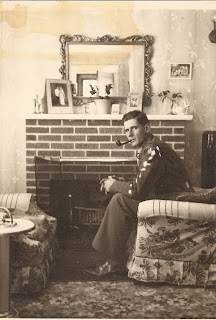 This is a poem about my mother's twin brother Bob Bellreng. The photograph of Bob was taken by my father Ray Wagner.

RELATIVE TO THE SPEED OF THE PAST

My mother’s twin brother was killed

At Normandy Beach while hanging

A telephone line from a pole. Never

Saw it coming. Came back in the

Late summer. The funeral was at home.

He was a handsome man, young and

Beautiful with a kind voice and a bright

Future. There were so many who did

Not come back. Every small town had

Some kind of board listing their dead sons.

Faster than that his nephews and nieces

Were growing old and laughing at how

They looked in the nineteen sixties, how

Long their hair was, how idealistic they were.

Even younger, their children are showing

Off their new babies and are being fussed

Over by relatives. There is still a war. It

Is much more informal these days. No

Boards with names on them in elementary

Schools. Now there are national monuments

With names on them. One must go to Washington

D.C. or the state capitol to see who these people were.

They still gave the same thing as their relatives,

Their lives. It isn’t legal, or barely so, to show

the boxes of the dead coming home.

The speed of the past is wildly furious.

Soon it will be lost again as it always is.

Soon we will stand in the fields of dead

And not one name will carry us away.

We will know nothing once again, implicitly.