Three painting by Stanislav Plutenko that I admire plus a lovely tram painting by Jacob Schinkaneder from c. 1910 and three poems of mine. 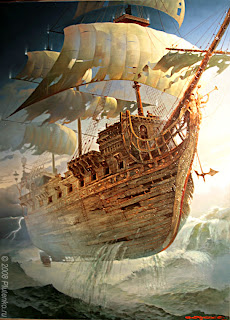 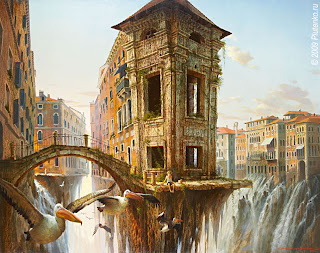 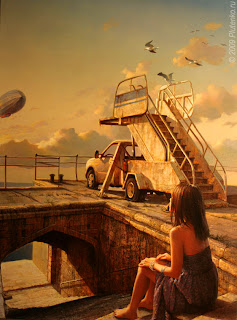 The sound of the train owns the night.

It finds itself in all the distances and landscapes.

We need never move and it swirls by, mars light orbiting,

Wiping the night as if it had an intelligence. It does not.

It is not there. It is gone before we hear the sound.

We may see it in the distance crossing a trestle or

Running into a central valley full to overflowing with

Red cars and tank cars and flatcars and cattle cars.

We are not invited to see its passing, waiting

In an automobile at the edge of the track at night, the clack-clacking

At the end of the snake’s body winking out in the huge night.

This beast is the neuron, the impulse moving on its own

Highways through our county, known by all, coated with its

Own history and lore, its legends and heros and more steam,

Diesel smoke and soundtracks for dreams than that body

Can absorb. It is our magic glowing room throwing itself

Through the great American night as cities and towns flash

By, always on its way to somewhere, crying the land in steel voices

I didn’t mean to speak

That softly and get lost

in your voice, but here I am

To weak just by the sound

Of your voice calling to me.

The wind begins to describe

The movements of three girls

Who believe themselves to be

Messengers of a group

Dreaming the sounds of all

As if a dance of this

Kind were possible without

What is possible is to hear this voice,

In patterns of rain across

The concrete, against car

Windows, racing down the superhighways,

Leaning upon the surface of the water.

Nothing will come of this detailed

Report. It will be simply weather,

A late arrival at a glittering doorway,

The arc of headlights

Around a street corner,

Necklaces of lights, the night only.

Should we see these girls

Without this kind of late brilliance

About them, they will seem

On their way to school,

Talking together, puffs of

The hiss of tires, disappearing

Toward the park, becoming

A part of the evening.